I first posted this piece back in January but it got deleted by from my blog by mistake. Since secular stagnation is back in the blogosphere with a vengeance: its time to repost it.

In a recent piece on his blog, David Beckworth has taken another swing at the secular stagnation hypothesis. Secular stagnation is a term coined by Alvin Hansen in a 1938 article in which he claimed that public expenditure might be required to maintain full employment. 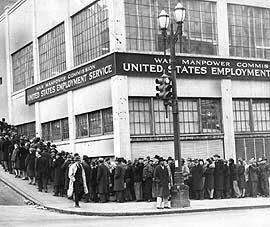 Here is Alvin, as quoted by David...

"The business cycle was par excellence the problem of the nineteenth century. But the main problem of our times, and particularly in the United States, is the problem of full employment. ... This is the essence of secular stagnation— sick recoveries which die in their infancy and depressions which feed on themselves and leave a hard and seemingly immovable core of unemployment."

Hansen is writing in 1938, before Keynesian economics had been forever altered by Samuelson's bastardization of Keynes' key idea: that high involuntary unemployment is an equilibrium that can persist for decades.

The secular stagnation hypothesis was resuscitated by Larry Summers.  In Larry's view

... it is increasingly clear that the trend in growth can be adversely affected over the longer term by what happens in the business cycle.

Larry supports his position with the following graph.

Growth is the percentage annual increase in real GDP.  In terms of Figure 1, it is measured by the slope of the lines that represent estimates of potential GDP made in 2007 (the dark grey line) and in 2013, (the light grey line). Try as I may, I do not see compelling evidence of a change in the slope.

What I do see in Figure 1, is evidence that a business cycle shock (the Great Recession) has caused a permanent downward shift in the level of GDP. And that is tragic because if Alvin Hansen is right, and I think he is, the gap between these two lines represents an annual loss of output of approximately one trillion dollars.

Contemporary accounts of secular stagnation, beginning with Larry Summers, confound two distinct ideas. The first, and this is Hansen’s meaning, is that a market economy, in the absence of counter-cyclical fiscal and monetary policies, may experience prolonged periods of high involuntary unemployment. The second,  is that a market economy may experience a period of depressed productivity growth.

David is critical of the second of these two ideas. Here is David...

"Hansen’s article was of course spectacularly wrong as a guide to the next few decades. Instead of suffering through stagnation we entered an extended, broad-based, and massive economic boom. In hindsight we can see that his analysis, ... was unduly influenced by the depression he was living through, ... [which] was the result of specific policy mistakes rather than inexorable trends. Recent research by Alexander J. Field shows that the 1930s were actually a time of exceptionally high productivity growth. "

David claims that postwar productivity  growth was high. That may be true. But it says nothing about secular stagnation, which is the idea that there has been a permanent long-term increase in involuntary unemployment. Back to David:

"The fact that Hansen was wrong does not prove that contemporary stagnationists are. In this case, though, history is repeating itself rather exactly. We do not pretend to know what the future path of economic growth in the United States will be. But the case for stagnation is weak—and, as in the 1930s, it is getting undue credence because of a long slump caused by policy mistakes."

Not so. David is confounding growth, the annual percentage increase in real GDP per person, with unemployment, the percentage of workers who claim to be looking for a job but are unable to find one. Growth remains a topic on which, as economists, we are spectacularly ignorant despite the fact that there is a large subset of  macroeconomists who have  studied very little else for the past thirty years. Unemployment, is a topic on which we have made considerable progress.

Were there policy mistakes?  Most certainly.  Would a more effective way of running monetary policy be to replace inflation targeting with a nominal GDP target as the market monetarists have claimed? I am skeptical.

It is a premise of the monetarist position, that the real economy is self-stabilizing and that a rule based monetary policy is the most effective way to ensure both low inflation and maximum sustainable employment.

Keynes claimed, in contrast, that the real economy can get stuck in a position of high unemployment and that permanent high involuntary unemployment can persist as an equilibrium phenomenon. See my earlier post on the neo-paleo-keynesian perspective. If Keynes is correct, and I believe he is, a single instrument, monetary policy, is not enough to hit two targets. Fiscal policy in one form or another, is an important second string to the policy maker's bow.